These last weeks, Yuri was again on the seas !
Thanks to the kind support of a few PA and DL hams, Yuri operates now with 150W on 144 MHz. The whole VHF DX community should be grateful for that support ! It allows every interested ham to work even more new “wet” squares !

Looking back at all the wet squares I have worked so far on 2m thanks to the operations of Yuri, it looks like this (Tropo and MS) : 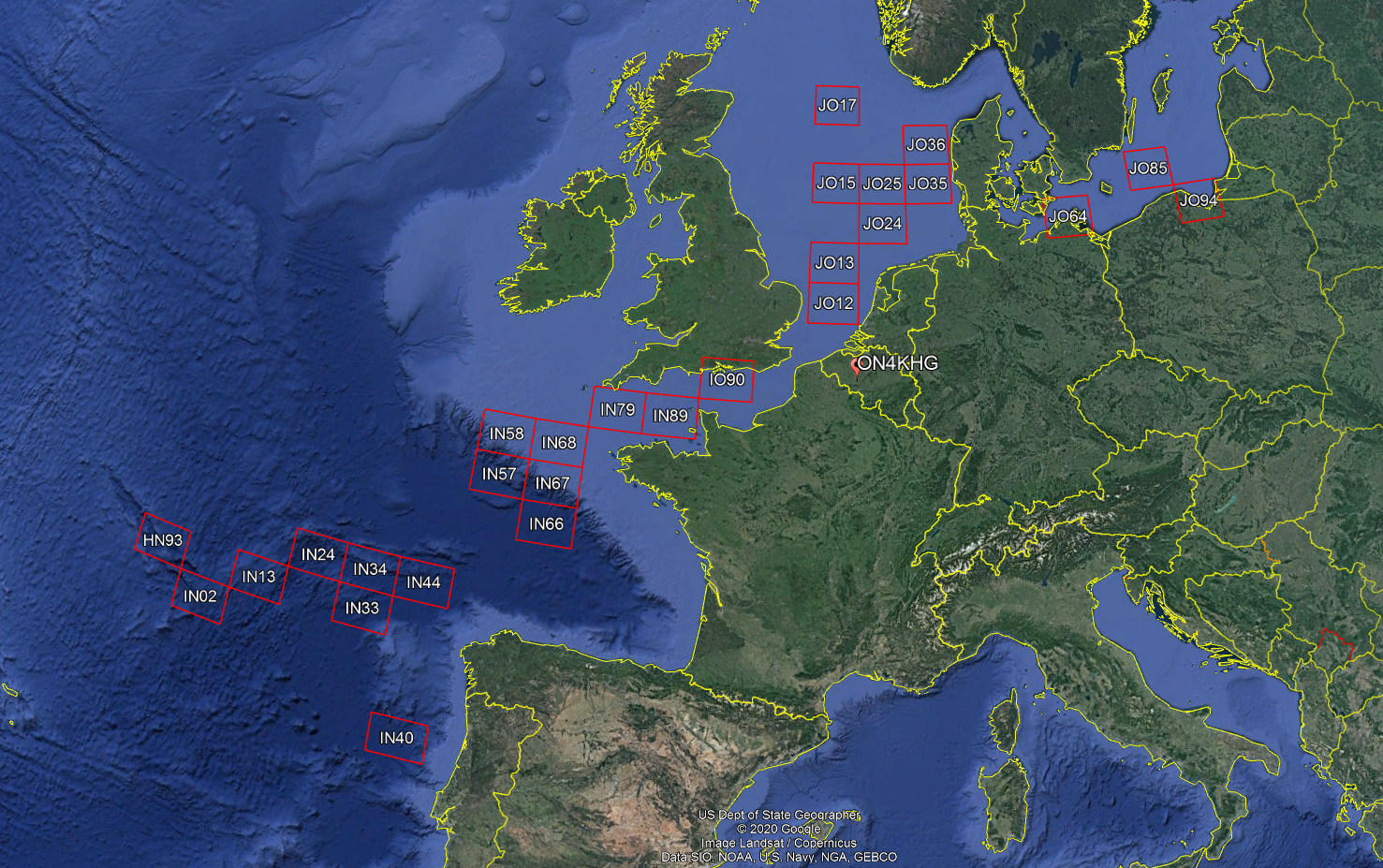 However, the antenna used by Yuri is a “tiny” 5 elements that holds on a 80 cm long boom, as you can see on the pictures below (click on the pictures to enlarge). This is a dual band VHF/UHF antenna with a gain of 5  dBi on 144 MHz. 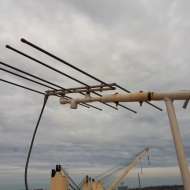 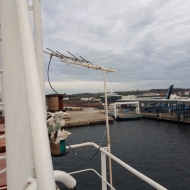 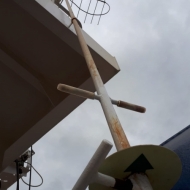 It is amazing to see how such a setup can produce FB MS reflections at 2000 km+, and how the tropo coverage extends far away too. In this regard, the uncluttered and flat surroundings, the sea, is quite helpful… 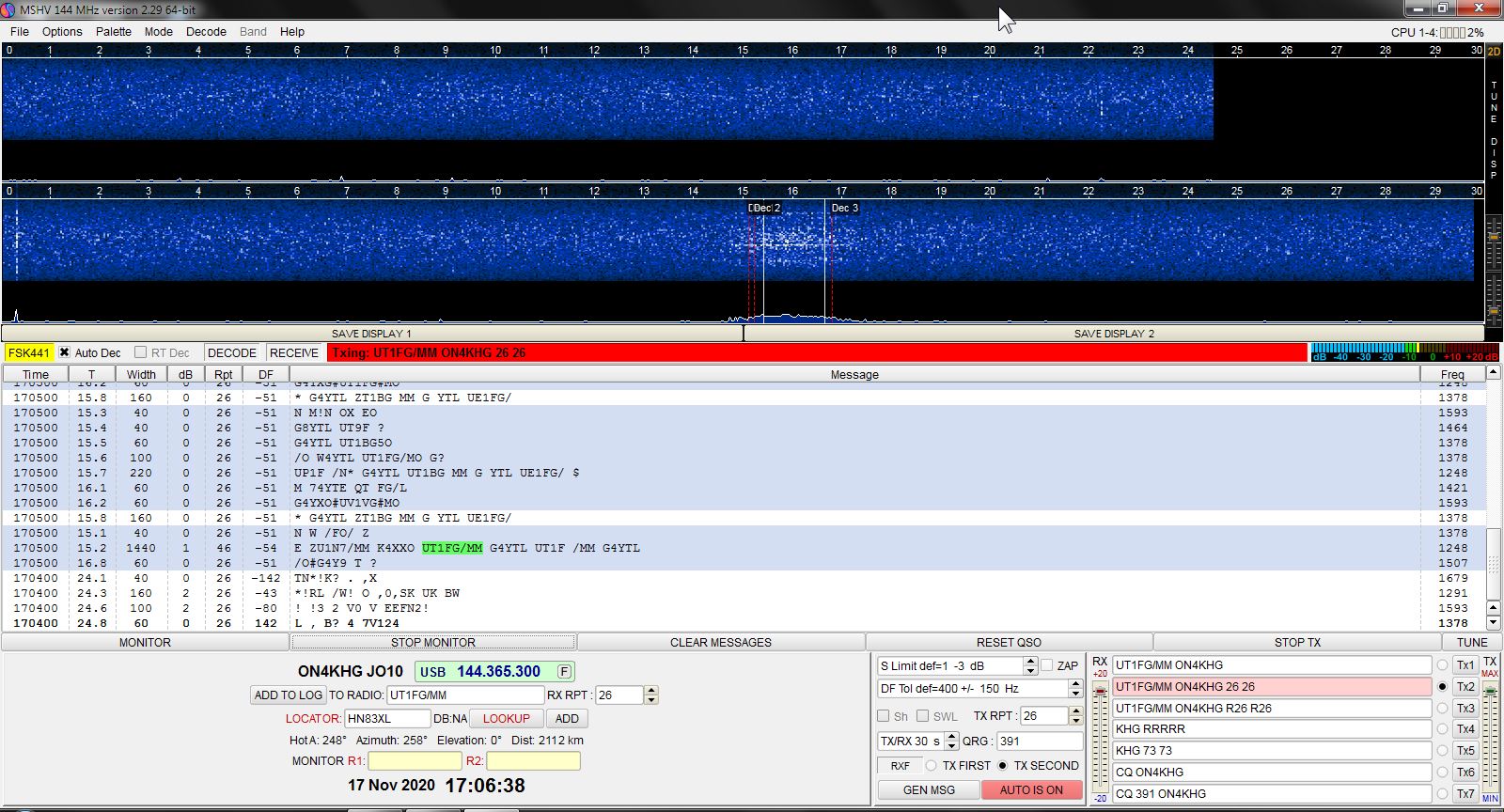 …But the sea is not always that flat ! 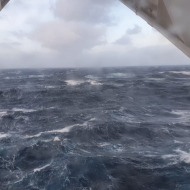 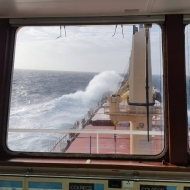 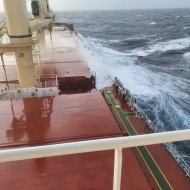 Yuri at its operating position : 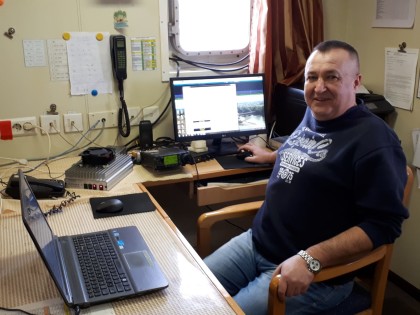 Thanks again to Yuri and the supportive team behind him. Well done !

Yuri, UT1FG is often active as UT1FG/MM on 144 MHz. He operates from the ship “Goldeneye”, a bulk carrier sailing under Cyprus flag. On the QRZ.com page of Yuri, one can see the ship. 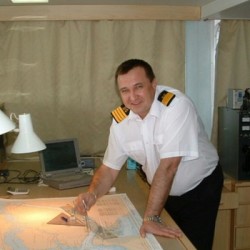 The Goldeneye has left San Lorenzo in Argentina on 8/12/2018 with Riga (Latvia) as destination. Yuri has been active during the travel from several “wet” squares on 144 MHz. I have been lucky enough to work him when he was in IN66, JO12, JO25 and JO36. Three of them were new #. The mode Yuri used was FT8. One likes FT8 or not is another discussion ! I wanted to know the full (6 digits) loactors where Yuri was when I worked him. Provided the latitude / longitude position of the ship can be received by costal stations receiving AIS (Automatic Identification System) frames emitted by the boats (161.975 and 162.025 MHz), it is quite easy to derive the QRA locator. I describe here the way I proceeded.

I go the either vesselfinder.com or marinetraffic.com. One has sometimes a more recent position that the other or vice-versa. The AIS frames contain the latitude and longitude of the ship ; these are broadcasted on the above mentioned frequencies. Once received by a costal AIS station that reports the received postions of the ships to vesselfinder or marinetraffic over the internet, one can retrieve the latitude and longitude of the ship. Below is an example with marinetraffic. Look for “Goldeneye” on the top right when accessing the website and you will get this if you select the Goldeneye from Cyprus, i.e. [CY] (click on picture to enlarge) : 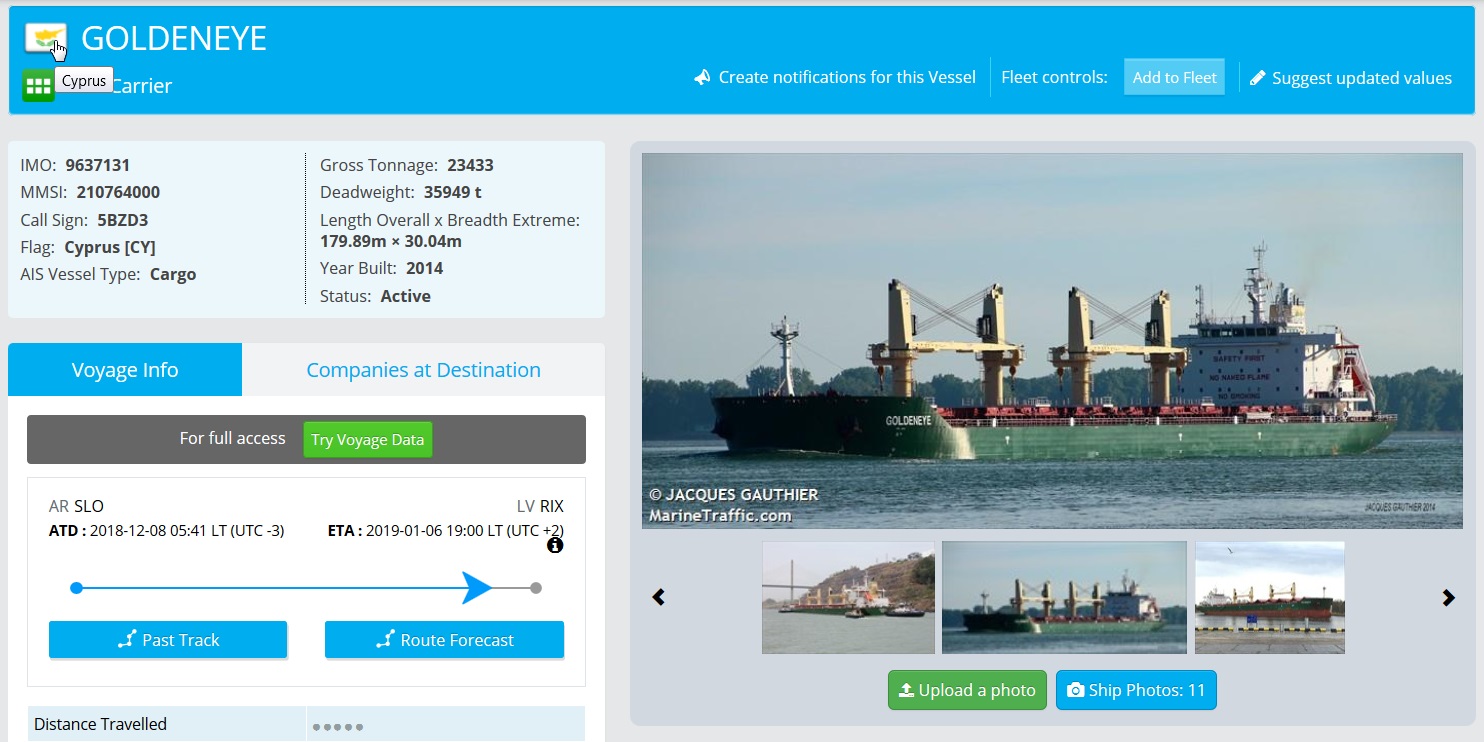 From there, you can see the latest postion of the ship, its past track and even its forecasted route. 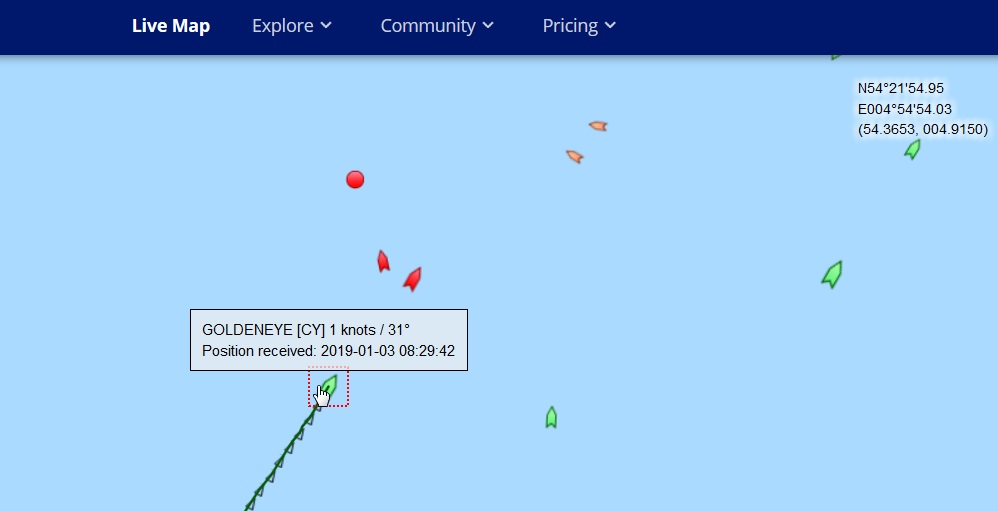 On the top right of the picture above, one can see the latitude and longitude of the ship, expressed both in DD and DMS. Feeding an online QRA locator calculator

(e.g. www.giangrandi.ch) with these data and one get the QRA locator of the ship. In the present case, it was in JO24KH. Again, this is possible provided the ship is under the coverage of a costal AIS receiving station. Otherwise, satellite positioning of the ships is also possible but this is a paying service !

End of January 2019, on his way from Estonia to Brazil, Yuri has activated again wet squares on 144 MHz. Yuri is transmitting with 20W into a 5 elements antenna. Hereby a screenshot from JO35 : 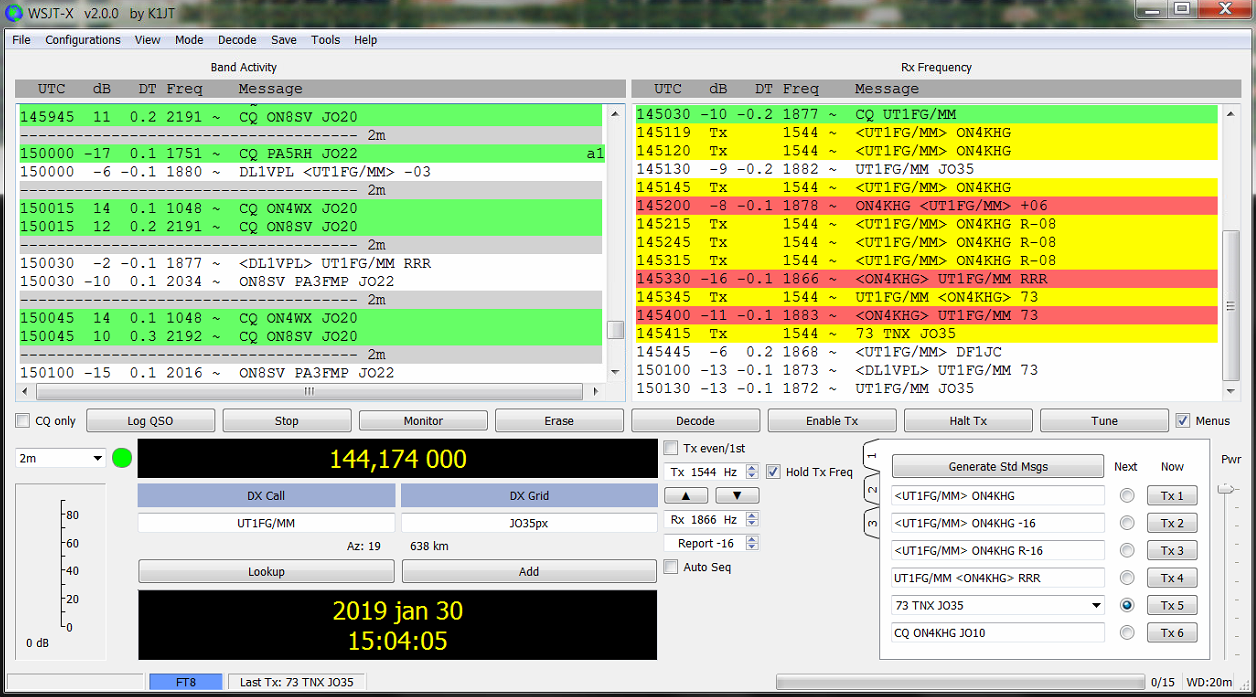 Many thanks to Yuri for activating all these wet squares !

This entry was posted in Trafic / Traffic and tagged UT1FG/MM. Bookmark the permalink.