On August 19th, 2021, I had the surprise to see “CT3KN” (IM12MT) on my screen in FT8 on 144 MHz at 10:56 UTC. Unfortunately, we couldn’t make a 2 ways QSO over that 2614 km path, 2-3 dB were missing to achieve it ! In 2011 and 2019, I already worked the Azores Islands (CU8) on 144 MHz in Tropo. Nevertheless, I never thought the path to CT3 (Madeira Island) would ever been possible. Indeed, if the sea propagation seems sometimes without “limits” (see the QSO’s on 144 MHz between D4 and EA8 and the Caribbean Islands), when there is land in between, that is another story. If on the path to the Azores the amount of land is very limited, on the path to Madeira, there is about 750 km of land to cross, with as many opportunities to have the tropo sea duct being interrupted.

Nevertheless, knowing that G stations as close to me as JO01/02 made their way to the Ricardo (CT3KN)’s log on August 18th evening, I called “CQ” from time to time with the antennas heading to the Azores on the 19th. And it paid ! Below a screenshot taken at my station :

And here is the screen at Ricardo’ side at the same time : 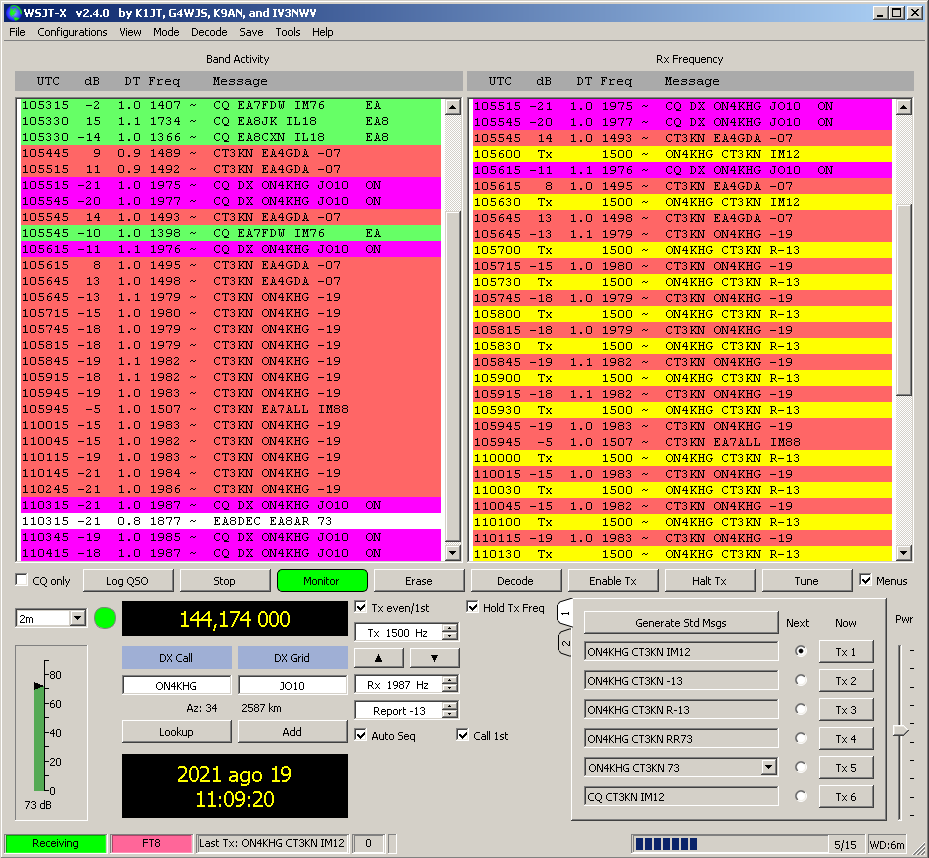 Ricardo is using 80W and 2×9 elements antennas. I’m using 1,2 kW and 2×9 elements too. It makes a difference of more than 10 dB, which is somehow reflected in the reports seen. I saw Ricardo -19 dB at best and he saw me -11 at best. At -11 dB, my signal was barely audible in a reduced bandwidth. Hence, even in CW, a QSO would have been hard to achieve (at same RF power level both sides).

After analysis of the PSK Reporter data and my log, one can see :

This is the complete path : 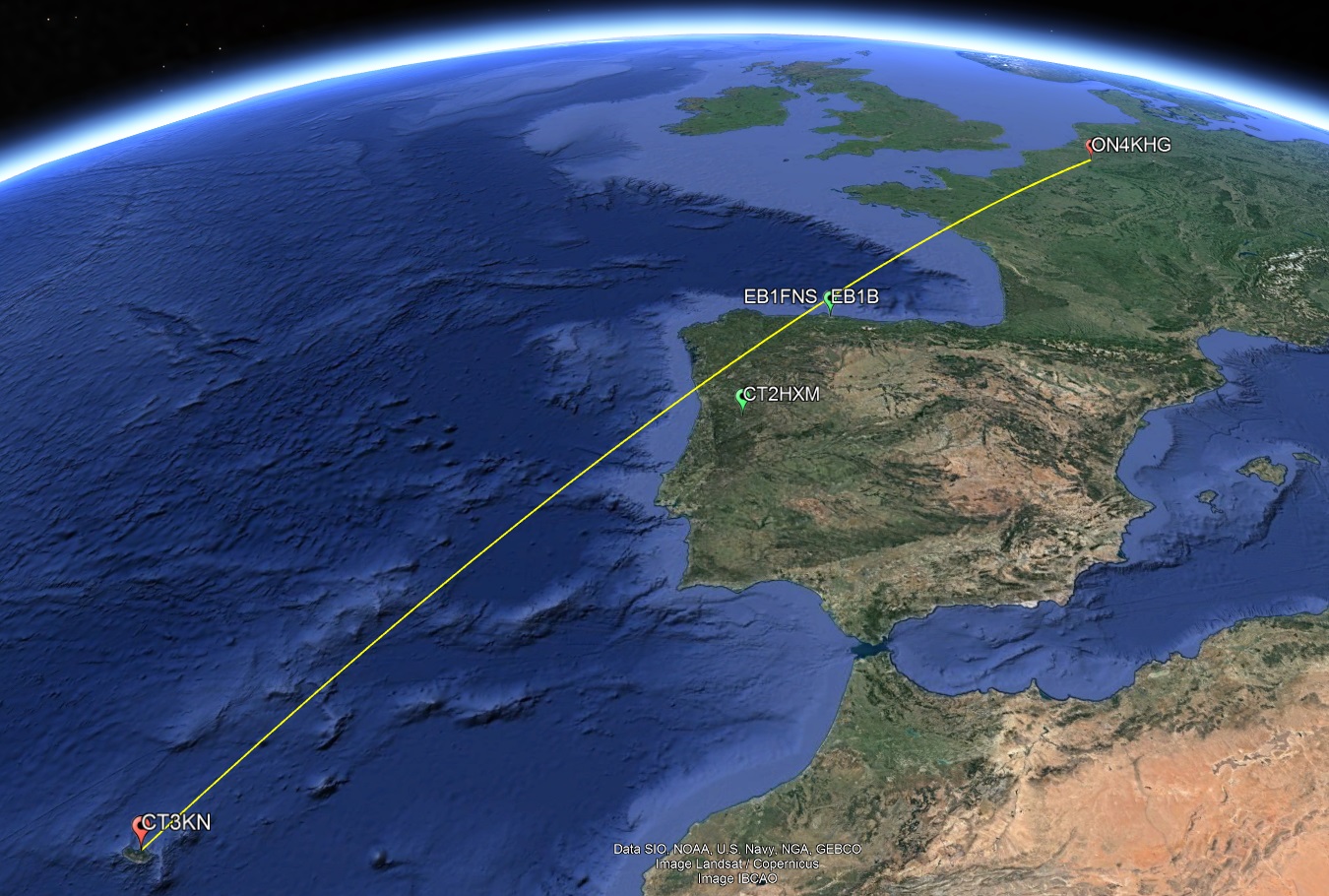 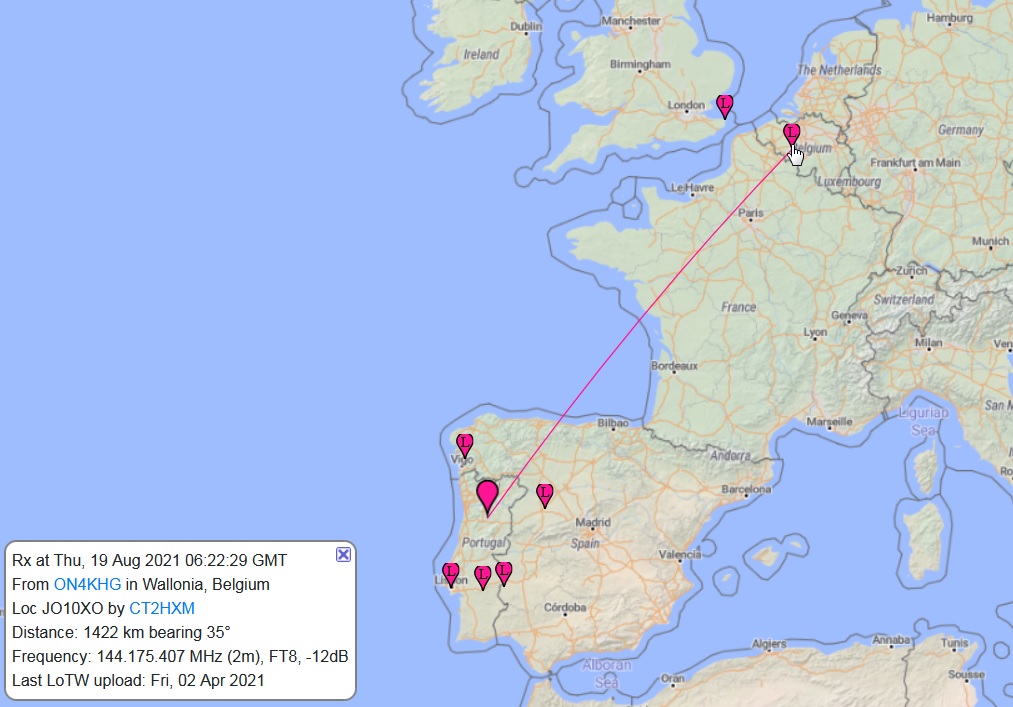 Looking at Hepbrun’s Tropo maps, the duct was clearly visible. It seems it peaked (for my location) between 09:00 and 12:00 UTC. The map below shows the Tropo forecast at 09:00 UTC on August 19th : 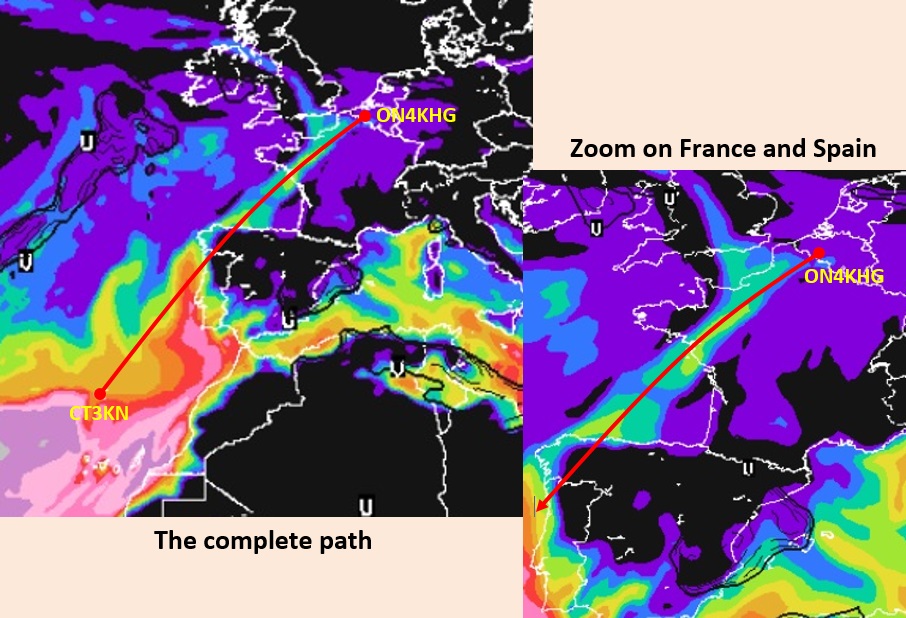 This was a very thrilling experience, even though we couldn’t complete a 2 ways QSO !

In such nice tropo conditions, working Ricardo (CT3KN) should be easy in Meteor-Scatter (actually “Tropo-enhanced MS”). Hopefully, as from IM12MT, Ricardo is located on the North side of Madeira, while Funchal (the capital city), is located on the South side, obstructed to Europe by mountains. I’m looking forward to try in MS with Ricardo, if not trying again and succeeding in Tropo !

This entry was posted in Trafic / Traffic. Bookmark the permalink.